Sevendust was in the area a couple weeks ago playing a show in Mankato with Disturbed, Korn, In This Moment, and Stillwell. This seemed like an opportune time to dust off from my vault of uncirculated concerts a gem from the early Sevendust days.

Click to watch Sevendust open the show with "Black".
Transferred directly from the master VHS-C tape, this show captures Sevendust when they were a baby band just trying to survive on the road soon after the release of their debut album. This show was in the midst of a tour supporting Coal Chamber with Powerman 5000, but both bands canceled on this night. Coal Chamber bailed to attend an MTV awards show for which they were nominated, and I believe Powerman 5000's bus or van broke down. Ticket refunds were offered, but Sevendust's dumpy RV showed up and they played as a headliner for little or no cover charge. Being the last band standing on the bill, Sevendust stepped up and delivered an hour-long set to about 30 people where they played every song from the debut album. During their "Covers Medley", the band has some fun and riffs on King Kobra, Dio, Ratt, Powerman 5000, Coal Chamber, and Black Sabbath. Despite the poor attendance, the band played like the bar was full and were genuinely appreciative of the support as they hung out to chat with everyone after the show. The stage lighting in the video is poor, but the sound quality is excellent. Most of these songs haven't been in Sevendust's live set for years, so this is a real treat if you're a fan of old Sevendust! 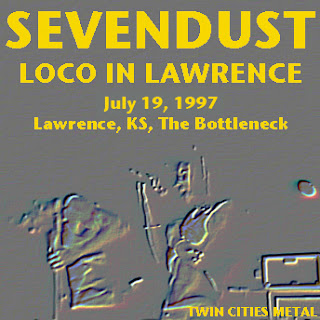 
Click on the link to download the text file that contains download links for both the audio (mp3@192 kbps) and video (mov, H.264, 640x480) files for the entire show. If you prefer, all the video can be streamed over on my YouTube channel. As always, please share the link to this post rather than the text file - it's much appreciated!