Glenn Evans, former drummer for thrash metal legends Nuclear Assault, got a mention in the Friday, July 6 edition of the Wall Street Journal (“The Tech Investor Is With the Band”, page D4) where he is credited with pioneering the live concert streaming methods used by Grateful Dead-like jam band Moonalice. The band livestreams every concert and makes archives available free through their website and their Moontunes iPhone app. Writes John Jurgensen:

“Moonalice’s push into video came after a member of the crew, Glenn Evans (who moonlighted until recently as the drummer in ‘80s metal band Nuclear Assault), start shooting performances. But Mr. Evans was soon swamped by editing footage after concerts.
Now, six small video cameras capture the band as it plays. Standing behind a mixing board and several video monitors, Mr. Evans cuts between the players…His live edit goes into formats including feeds for iPhones and Android phones. A dish, typically perched on one of the band’s trucks outside the club, transmits the feed up to a satellite. The signal takes less than a minute to reach viewers, who can stream it via a basic 3G connection on their phone.” 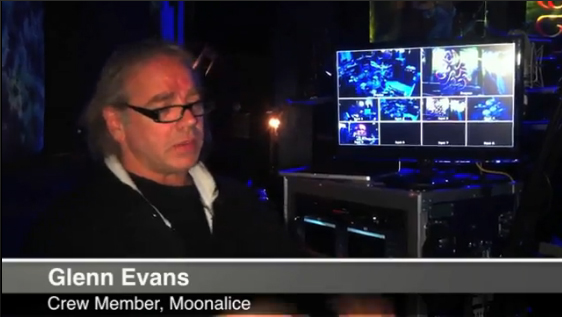 Still shot of video interview with Glenn Evans in the Wall Street Journal.

Moonalice invented “Twittercasting”, where a link to the video for each song is sent out by Twitter during concerts. Maintaining a satellite hookup isn’t cheap, however, and Moonalice has spent about $100,000 on their streaming initiative. Guitarist and vocalist Roger McNamee advises other bands, “’I’m not telling other bands to go out and buy a satellite network; the point here is to broadcast everything you do, every night. And that you can do for free in a lot of places’ using available Wi-Fi connections.”

It also helps that Roger co-founded Elevation Partners, a private equity firm, with Bono of U2 and can underwrite large technology expenses for the band. Many clubs livestream concerts, of course, using in-house cameras (usually poor single-mount cameras at the back of a room) and web services such as Livestream, but Moonalice’s method puts the band in complete control of the production and distribution. It will be interesting to see if adoption becomes more common as upfront equipment costs come down. I can see a band such a Metallica becoming an early adopter of this.

The link to full article at the Wall Street Journal is here (paid subscription may be required), which also includes a video with a short interview with Glenn Evans. Text of the article (no video) is available at the Moonalice site here.
Labels: Elevation Partners, Glenn Evans, live concert streaming, Moonalice, Nuclear Assault, Roger McNamee, Video
Posted by mplsmetal at 6:03 AM