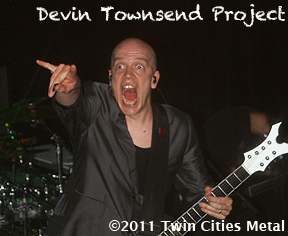 Having seen Strapping Young Lad and the Devin Townsend Band a few times before, I knew to expect the uncanny during this support slot to Children Of Bodom. Although the set was short (35 minutes), it ranked up there with two other memorable shows by Devin. The first time I saw SYL was way back on the City tour (opening for Testament and Stuck Mojo), undoubtedly the best time to have seen them. My favorite Dev show was seeing the Devin Townsend Band open for Symphony X about 5 years ago, where floored me by playing some songs from the godly Ocean Machine album. 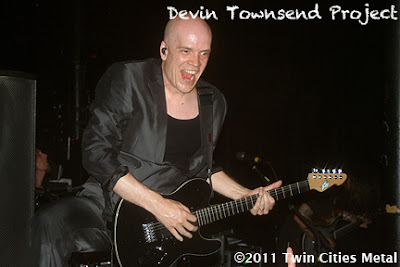 Back to the present - this show was sold out and Station 4 was unbearably hot inside. Septicflesh and Obscura did a great job opening the show, but everyone was here for the final two acts. Multiple equipment problems delayed the start of DTP's set, but Devin keep the crowd entertained with his bizarre wit as he and the crew scrambled to get things going. Having released four albums in the last two years, it was shocking that only two of the six songs came from those albums. "By Your Command" from Ziltoid The Omniscient opened the show before Dev dug way back for "Truth" and "Om". Introduced as a ballad, "Supercrush!" would have been the evening's highlight if they hadn't followed this with "Kingdom", a super heavy, emotional song from the criminally overlooked Physicist album. It's one of my favorite Dev songs, and I couldn't believe I was actually hearing performed live to perfection. "Juulaar" was cut from the set, so "Stand" closed out the show.

Click to watch the Devin Townsend Band perform "Kingdom". Videos of the entire set can be viewed at my YouTube channel.

This was the most engaging I've ever seen Devin, and his on-stage banter can only be described as unique and bizarre. His band sounded tight despite playing in extreme heat. I'll get to Children Of Bodom in an upcoming post, but in many ways DTP stole the show. Download this and bask in the glory!

Click to watch the Devin Townsend Band perform "Supercrush!". Videos of the entire set can be viewed at my YouTube channel. 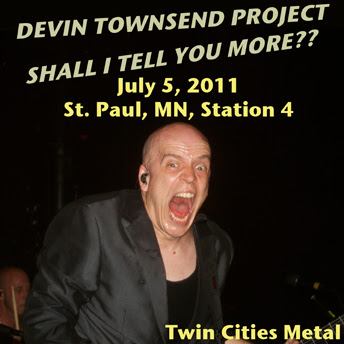 
As always, please feel free to share the link but do me a favor and share the link to this post rather than the download link. Thanks!
Labels: Audio, Concert Review, Devin Townsend Project, Pictures, Video
Posted by mplsmetal at 1:39 AM