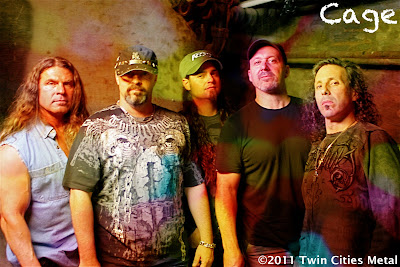 Click any picture to see additional photos of Cage (27).
Power metal survivors Cage have put forth a significant effort in touring the US in the last 5–6 years, so it’s been a treat to have them here in The Cities for the third time in recent years. This show was the first of three on a short run through the Midwest as the band is gearing up for the release of their sixth album, Supremacy Of Steel. 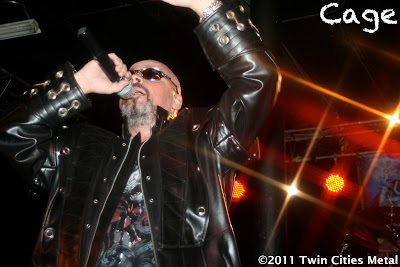 My review of the show will be in two parts—Cage here in Part 1, to be followed soon with the supporting bands in Part 2. I also conducted an exclusive video interview with all five members of Cage before the show, and this will also be posted in the near future. 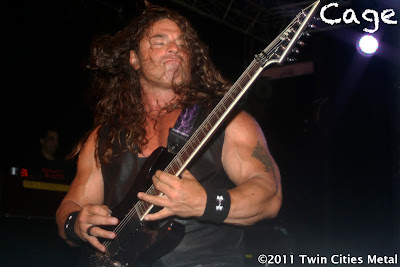 Having seen Cage numerous times since the early Unveiled and Astrology eras, I can state with confidence that this was the best show I’ve seen to date, and this version of the band is the most polished and technically proficient. Steve Brogden has moved bass to guitar, while Psychotic Waltz drummer Norm Leggio’s bandmate from Teabag, Pete Stone, has joined Cage on bass (I’ll have to dig out some old pictures of Norm and Pete playing in Teabag!). Leading this new lineup are original vocalist Sean Peck and guitarist Dave “Conan” Garcia. Everyone was in top form, and Cage has definitely solidified a loyal base of fans here in the Twin Cities.
Watch Cage perform “Doctor Doom” from the upcoming Supremacy Of Steel album. Visit my YouTube channel to see videos of the complete show!
Cage is pushing the upcoming Supremacy Of Steel album hard, and they ripped into five new songs this night, many played live for the first time. Selections from their last three albums, Science Of Annihilation, Hell Destroyer, and Darker Than Black, rounded out this marathon 15-song, nearly 90 minute set. New song “Bloodsteel” opened the show with a blistering scream from Sean, then they immediately launched into crowd favorite “I Am The King”. Two more new songs, “The Beast Of Bray Road” and “Doctor Doom”, also received a great response from the audience. Cage then settled into a string of familiar tunes, including fire-spitting versions of “Planet Crusher” and “Hell Destroyer”. “War Of The Undead”, another new one that was debuted in Minneapolis last year, kept the band on fire and eventually led into the set closer, “Metal Empire”, the last new track of the night which can only be described as epic. Wasting little time before returning for an encore, Cage sounded rejuvenated as they ripped into the brilliant “King Diamond” and a pounding version of “Metal Devil”. The last surprise for the night was closing affairs down with a nearly 11 minute version of “Wings Of Destruction” from Darker Than Black.
Watch Cage perform “Bloodsteel” from the upcoming Supremacy Of Steel album. Visit my YouTube channel to see videos of the complete show!
Cage once again demonstrated that they continue to be taken seriously as one of the top power metal bands in the world. Their consistency over six albums is virtually unmatched and they are a force to behold live. Incredibly, Cage continues to get better and they’ve yet to reach their creative peak. Judging from the new songs played this night, Supremacy Of Steel will leave the metal world wondering how Cage does it. “Doctor Doom”, “Metal Empire”, and “The Beast Of Bray Road” were probably my favorites. Although Cage’s past US tours have not been extensive the band is making a serious effort to penetrate more markets, so do yourself a favor and get out to see them if they come to a town near you. 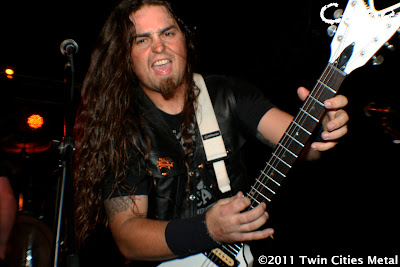 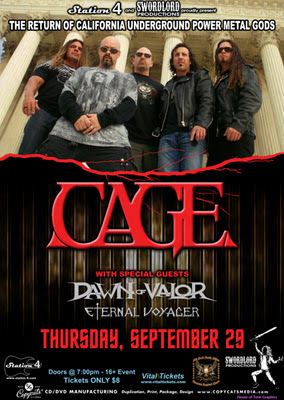 Head on over to my YouTube channel to watch videos of Cage’s entire performance, and check back soon for an exclusive video interview with the entire band and Part 2 of the concert review for pictures and videos of the supporting bands Iron Finger, Dawn Of Valor, Minos, Eternal Voyager, and Noble Beast.
Labels: Cage, Concert Review, Dawn Of Valor, Eternal Voyager, Iron Finger, Minos, Noble Beast, Pictures, Video
Posted by mplsmetal at 8:03 AM