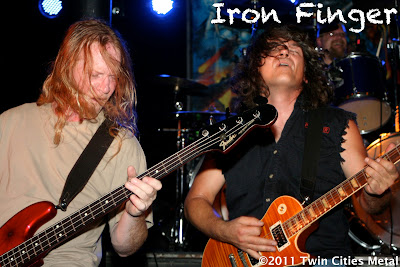 Click on the picture to see additional photos of Iron Finger (12).
Cage’s headlining performance was covered in Part 1 of this review, so now here’s the rundown of the rest of the bill. Those arriving at the venue early were rewarded with a crushing performance by the best support band of the night, Iron Finger. Hailing from Chicago and along for the duration of this quick Midwest run with Cage, Iron Finger blew down the doors with a thick dose of groove-laden heaviosity that demands attention. Their set began with a couple instrumentals before the bass player stepped up to sing for the last three songs. Iron Finger’s stripped down approach belies the fact that there are some serious molten riffs and thoughtful soloing from guitarists Gerry Buckzo, formerly of Nomad and Cage during their earliest days, and Paul Kratky, who also plays in cult legends Slauter Xstroyes. The band is planning on incorporating a new full-time vocalist in the near future, but I thought the bass player sang just fine. He sounds a bit like Scott “Wino” Weinrich (The Obsessed) without the drama. This is trendless, heavy rock that is all too rare and that would have widespread appeal. Someone sign this band now.
Watch Iron Finger perform “Ride On”.
Watch Iron Finger perform “Nightmare”.
Watch iron Finger perform “Saviour”. 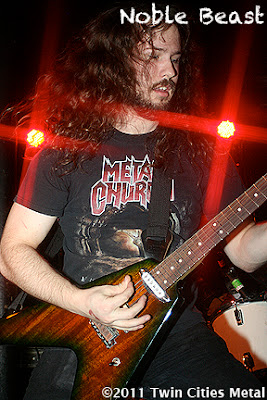 Click on the picture to see additional photos of Noble Beast (14).
Next up was Noble Beast from St. Paul, who mix up Megadeth-style technical riffs with grand melodies popularized by European power metal bands. It’s an approach that works, but the vocals put me off at times. I actually really like it when the vocalist and guitarist Rob Jalonen screams much more than his singing, not enough for to write them off, though. He and guitarist Matt Hodsdon work in tandem quite well, and the technical talents of the band are admirable. Noble Beast is certainly worth keeping an eye on as they have a lot of potential.
Watch Noble Beast perform “Master Of Depravity”. An additional Noble Beast song can also be viewed on my YouTube channel. 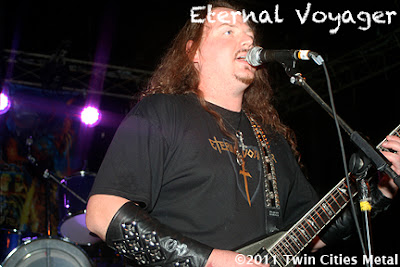 Click on the picture to see additional photos of Eternal Voyager (17).
Eternal Voyager then took the stage to deliver an interesting set that showcased longer songs that venture into speed-style progressive territory. Although this was his final show with the band, Hollowstone keyboardist Don brought a great element to Eternal Voyager’s sound without trying to dominate his presence. Hopefully a suitable replacement for him will be found soon. Again, the vocals were a weak spot for the band, but it’s not too much of a distraction. Eternal Voyager is one their way to forging their own unique sound, so they’re another band to check out for upcoming shows.
Watch Eternal Voyager perform “Army Of Our Lord”. “Eternal Voyager” can also be viewed on my YouTube channel. 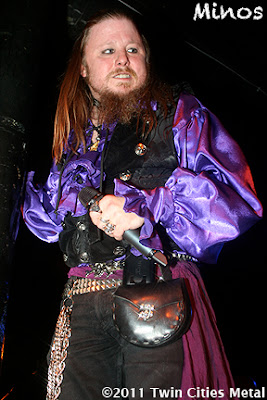 Click on the picture to see additional photos of Minos (15).
As with Noble Beast and Eternal Voyager, I’ve never been to a show early enough to catch Minos on their many support slots so I had no idea of what to expect. Hailing from Rochester, Minnesota, Minos delivers convincing folk metal that thankfully forgoes superfluous instrumentation and childish melodies that seem to plague many bands that play in this style. I’m not a fan of much folk metal, so I was surprised at how much I enjoyed their set. The promoter of the show, The SwordLord, even got up on stage to join Minos for guest vocals as duet on “Lost River”. This is my no means my type of metal, but you have to admire what Minos is doing and they’re clearly at the top of their game.
Watch Minos perform “Lost River” with guest vocals from The SwordLord. “Skyfire” can also be viewed on my YouTube channel. 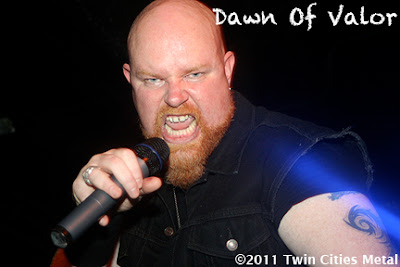 Click on the picture to see additional photos of Dawn Of Valor (23).
Dawn Of Valor was the final support band of the night, and this was the first opportunity I’ve had to see them since some major personnel changes took place earlier this year. Vocalist Jaden Adair is now fronting the band, and a new guitarist and drummer have also joined bassist Ted Jedlicki and guitarist John Leibel. The changes have done the band good, and all aspects of the band are now at a higher level. This was on display as Dawn Of Valor blitzed through all three songs from their latest EP, Immortal Flame, three more from their self-titled EP, as well as “The Metal Calling”. Jaden is an aggressive, in-your-face singer, and he brings new intensity to the band’s traditional-style power metal. These guys are probably the most active local band out promoting themselves everywhere, so the new lineup and EP should help raise Dawn Of Valor’s profile throughout the area metal scene.
Watch Dawn Of Valor perform “Valkyrie Sky”. The rest of the band’s set can be viewed on my YouTube channel.
Watch Dawn Of Valor perform “There Can Be Only One”. The rest of the band’s set can be viewed on my YouTube channel.
This was an impressive night of local talent, and band brought something different to the bill. Chicago’s Iron finger, however, stole the show with a professional-level performance and a killer sound. All of the bands are worth seeing, so be sure to give them your support at upcoming shows. Headliner Cage took the stage after Dawn Of Valor, so click here for the review of their show with plenty of pictures and complete video footage.
Labels: Cage, Concert Review, Dawn Of Valor, Eternal Voyager, Iron Finger, Minos, Noble Beast, Pictures, The Swordlord, Video
Posted by mplsmetal at 12:17 PM