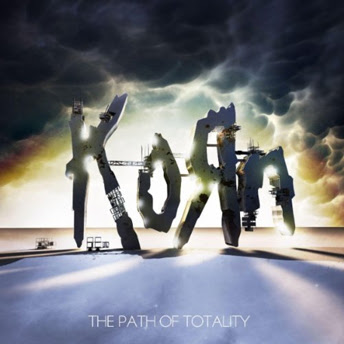 Take a divisive band in the metal community, mix them with one of the most hated forms of music (dubstep/electronica), and you’re bound to have one of the most controversial albums in years. The Path Of Totality sees rap/nu-metal pioneers Korn (can anyone believe they’ve consistently ridden the top of the charts for nearly 20 years now?) doing the unthinkable. As strange as it sounds, it totally works. There’s guitars here - not the crushing down-tuned chords you’re used to from Korn, but clean and effect-laden guitars that let the electronics come to the fore. What keeps this sounding undeniably like Korn is Jonathan Davis’s distinctive vocals. He’s singing more than ever here (sounding like Gary Numan at times!), but he also lets loose at times in a manner to which we’re more accustomed. I’ve never heard of a single person with whom Korn has collaborated on the album, but a variety of different moods and sounds are brought to each song. The best songs are brilliant, and they all feature Skrillex – “Get Up!”, “Narcissistic Cannibal”, and “Chaos Lives In Everything”. The remainder of the album more than holds its own with “Illuminati” being the worst track, but with only one song topping the four-minute mark (“Bleeding Out”) your attention never wavers. Credit really must be given not only to Korn, but to Roadrunner for being willing to release The Path Of Totality. Many untold albums have never (at least initially) seen the light of day, the most notorious example being Neil Young when he dared to experiment. At best, this type of album would typically be issued as a stopgap “remix” EP or maybe saved for B-sides. Korn, of course, should be lauded for taking a potentially fatal career risk with The Path Of Totality. Rare is the established band that’s willing to experiment so drastically with their signature sound, and even more rare is the occasion when the experiment succeeds. The Path Of Totality is a complete artistic triumph. One can only hope that Korn’s current live show features most of the album, if only to see how they pull it off. Will they use a ton of effects and canned tapes to sound true to the album, or will they reinterpret the songs with just guitars, bass, and drums? I wouldn’t even want to know and have the surprise spoiled. Can it dared to be said now that Korn is a progressive metal band?

Korn will perform Sunday, June 24 at Myth in St. Paul. Support will come from Sluggo and J Devil.
Labels: Album Review, Korn, The Path Of Totality
Posted by mplsmetal at 1:45 PM