Here's the second half of the latest metal concert news for the Twin Cities area, covering July and August. See Part 1 for the updates for June.

Buckcherry returns to the area for a show on Wednesday, July 3 with Girl On Fire at the Vetter Stone Amphitheater in Mankato.

Cantharone has another show lined up at the Hexagon Bar in Minneapolis with Hate Beast on Thursday, July 4.

Long-running punk band Meat Puppets will play four shows in Minnesota to promote their 14th album, Rat Farm, released on Megaforce earlier this year. They play two shows on Saturday, July 13 – an early 5:00 show at the St. John’s Block Party in Rochester, followed by an 8:30 show at the Twin Cites Roots, Rock and Deep Blues Festival in Minneapolis at Patrick’s Cabaret. The next night, Sunday, July 14 has them at Tycoons in Duluth with Actual Wolf and Enemy Planes.

The day after performing with Sevendust in Rochester, Otherwise has their own headlining show on Sunday, July 14 at Pov’s 65 in Spring Lake Park with special guests Throw The Fight and The Soft Light. 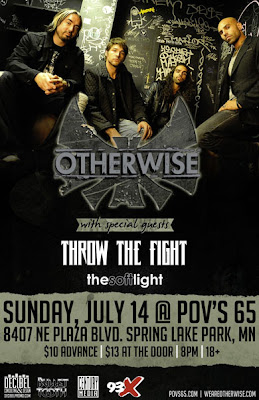 Ambassador Gun hooks up with Philadelphia’s Sadgiqacea, Hivelords, and Poney for a show at the Nomad World Pub in Minneapolis on Friday, July 19. 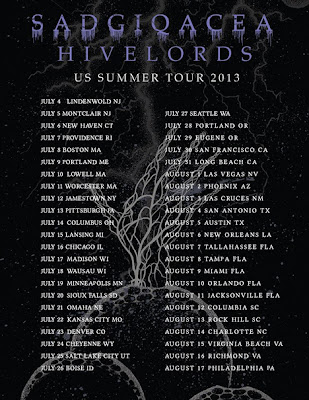 The Meat Puppets’ fourth Minnesota show happens at the What’s Up Lounge in Mankato on Friday, July 19.

Comical metal band Psychostick returns, this time to Pov’s 65 in Spring Lake Park on Friday, July 19 with Outside The Murder and Strate-Jak-It. 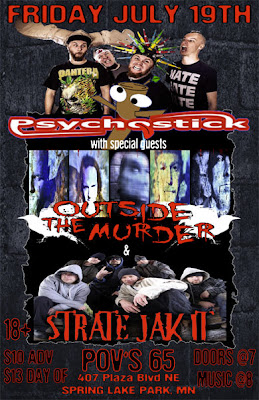 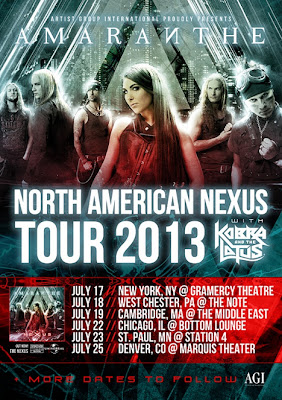 Although they long ago abandoned their early punk roots, Minneapolis’s own Soul Asylum tops the Skyline Music Festival with Big Head Todd And The Monsters, Matthew Sweet, and Gear Daddies to Target Field in Minneapolis on Friday, July 26. 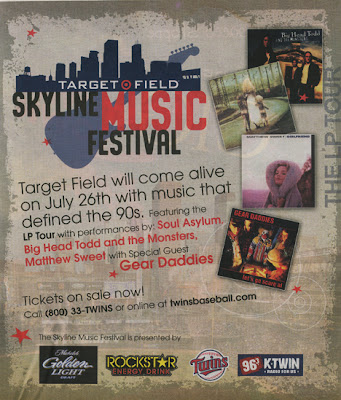 A huge lineup of local bands have organized the Metal For Life event at Neisen’s in Savage on Saturday, July 27—all proceeds will be donated to the Shriners Hospital for Children. Slated to participate are Cantharone, Piranha, Gryzor, Matrekis, Clobberboot, Eldergaad, Dark Mirror, Tomorrow Brings New Blood, Chaostrophe, Deretla, Monogon, and Malice (MN). This event is all ages are starts early at 10:00 am. 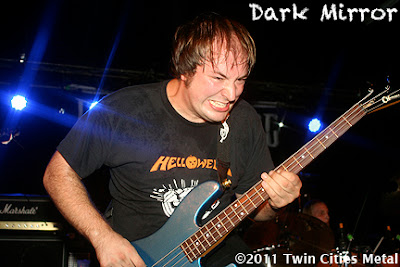 Locals Nuisance also play on Saturday, July 27 at the Cabooze in Minneapolis with Slow Spokes, Aeous, We Be Lions, and Up Rock.

Florida instrumentalists Set And Setting play the Hexagon Bar in Minneapolis on Wednesday, July 31. Their debut album Equanimity was released last week through Forcefield and Science of Silence.

Down in Mankato at the Vetter Stone Amphitheater you can catch rock band Everclear at the Mankato Ribfest on Friday, August 2.

The Monday, August 5 Vampire Weekend show at the Orpheum Theatre in Minneapolis is SOLD OUT. 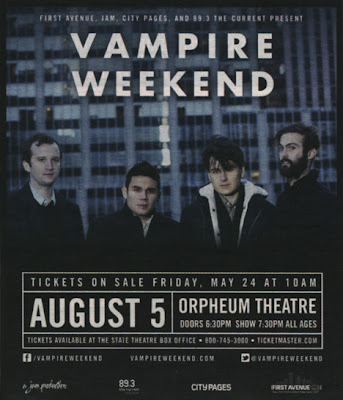 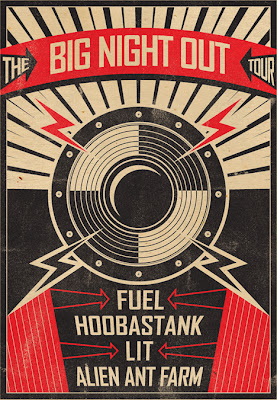 The Vetter Stone Amphitheater in Mankato has a big night of 80s metal with Ratt, Sebastian Bach, Dokken, and Lita Ford on Thursday, August 15.