Juhana Rossi and Ellen Emmerentze Jervell for the Wall Street Journal reported on the June 5 front page about the phenomenon of of black metal and folk metal inspiring fans to learn the obscure Finnish and Norwegian languages in an article titled "To Really Understand Hevibändi, Its Helps to Know the Language":

"A band of young metal heads—spanning Romania to Singapore—have taken up a Northern European language in order to better appreciate or even mimic their favorite metal bands." 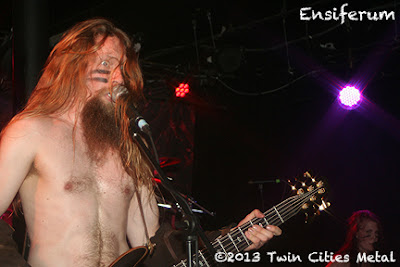 Sami Hinkka of Ensiferum performing at Station 4 in St. Paul on April 12, 2013. Click on the picture to see more photos of Ensiferum (20).

Ensiferum, who recently played in St. Paul, is even quoted:

"'Every time someone tells us that our music has inspired them to learn, for example, Nordic languages, it gives me another reason to keep doing music,' Sami Hinkka, the 35-year-old bassist for Finland's Ensiferum, said. Growing up, he read the lyrics of Iron Maiden and Metallica and used a dictionary to help translate the words. 'But it's quite far from studying an internationally rather useless language,' Mr. Hinkka said. Still, he says, 'studying is always good for your brain and it broadens your mental horizon, so if someone has a passion for something, even it it might seem really trivial to others, I say go for it. Follow your heart.'"

The online version of the article (here, but behind a subscriber paywall) helpfully includes an audio player with audio clips of "Viima" by Korpiklaani, "Pohjola" by Ensiferum, and "Ødeleggelse Of Undergang" by Gorgoroth to help the Journal's readers understand the differences between folk metal and black metal.

Watch the accompanying video report below (which includes clips of Satyricon's "Fuel For Hatred" video) where John Stoll, Wall Street Journal Nordic Bureau Chief, is comically asked, "What is Viking metal, and what is it they're singing about?" and "You, yourself, you a bit of a slave to heavy metal are you? Are you a fan of Moonsorrow, the crusaders of epic heathen metal?"