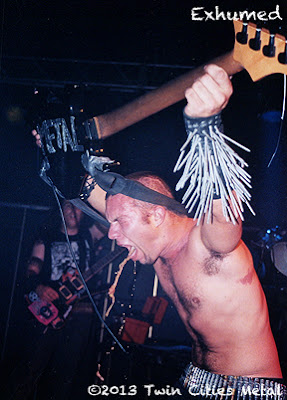 Exhumed playing way back in August 2000 at the Showcase Theater in Corona, California.

I posted last week that local doom/sludge band Vulgaari would be playing at Surly Brewing's Darkness Day in Brooklyn Center on Saturday, October 26, but no other details were available beyond that. Now, the full band schedule for Darkness Day can be revealed and it's a monster! Joining Vulgaari will be death/gore masters Exhumed alongside Rivers Of Nihil, local shock kings Impaler, God Came From Space, and Fallen Empire. All bands will be playing outside, and here's the itinerary: 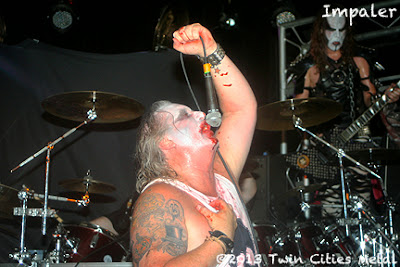 This is the sickest lineup for Darkness Day yet! Exhumed and Rivers Of Nihil will be doing two shows on Saturday - after Darkness Day ends you can head down to Skyway Theater Studio B in Minneapolis to catch them with Dying Fetus. 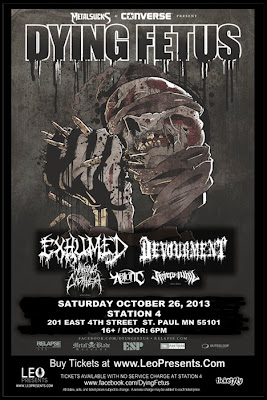 I'm sad that Powermad will not be playing this year; it could be due to logistics—drummer Dirk Verbeuren happens to be in Soilwork. Surly's Head Brewer and Powermad guitarist Todd Haug also now plays with Vulgaari. 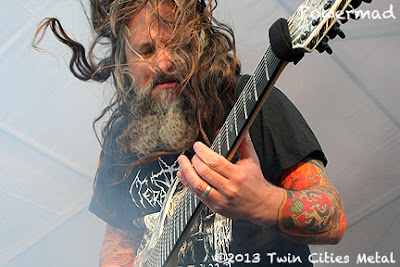 Vulgaari guitarist and Surly Head Brewer Todd Haug ripping it up with Powermad at Darkness Day 2012.

Thanks to Zack from Vulgaari for all of the information! You can see Vulgaari tonight at the Triple Rock Social Club in Minneapolis as they support English stoner masters Orange Goblin with thrashers Holy Grail and Lazer/Wulf. This is an 18+ show, and Vulgarri goes on first around 7:30.
Labels: Darkness Day 2013, Exhumed, Fallen Empire, God Came From Space, Impaler, Powermad, Rivers Of Nihil, Surly Brewing, Todd Haug, Vulgaari
Posted by mplsmetal at 7:10 AM