Several things were mistakenly not published here, among them some concert reviews back from October and November. Over the next couple of weeks some of these older items will thrown in alongside the usual updates and reviews of upcoming bands and shows to the area. Here's the first... 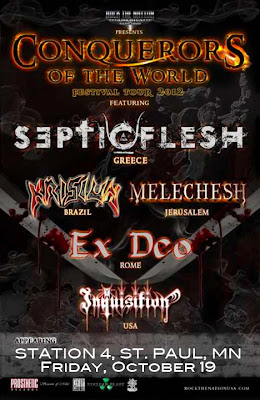 Man, is it hard to get down to clubs for early show times! Unfortunately by the time that I arrived at Station 4 I had missed Inquisition, Ex Deo, and Melechesh. I only caught a little bit of Brazilian thrashers Krisiun, so I’ll limit my comments to the reason everyone was here – Greece’s Septicflesh. Having only seen Septicflesh twice as early support to Cradle Of Filth with Satyricon and Children Of Bodom with Devin Townsend, it was long past due for this incredible symphonic black metal band to be headlining. 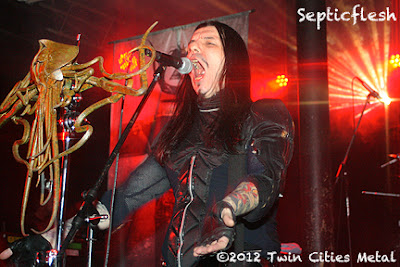 Click on any of the pictures to see more photos of Septicflesh (25). 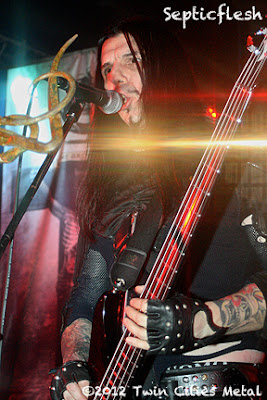 The show was an expanded version of the same six-song set they played in July 2011 while opening for Children Of Bodom. Taking the stage while the choral introduction of “The Vampire From Nazareth” played, Septicflesh hit the ground running with bassist and vocalist Spiros Antoniou leading the crowd into chants during the opening track from their latest album, The Great Mass. “Communion” blitzed along to its hyperspeed drumming, followed by “A Great Mass Of Death”. The band then went back to 2003’s Sumerian Daemons album for two of its best songs, “Virtues Of The Beast” and “Unbeliever”. “Pyramid God” had the crowd clapping and stomping with the bass drum-led introduction before more impossibly fast drumming by Fotis Benardo on “Lovecraft’s Death”. Things slowed down for “Oceans Of Grey” before the last group of songs from Communion: “We, The Gods”, “Persepolis”, and the awesome “Anubis”. The set closed on a high note, with “Five-Pointed Star” whipping the crowd into a final frenzy before the band members left the stage in slow, dramatic, one-by-one fashion to the slow drum beat and recorded horns as the song ended. 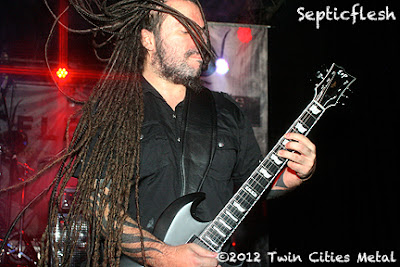 Septicflesh plays along with the recorded orchestral and choral tracks to achieve the full effects on each song. While it allows them to replicate their music as intended to be heard, it does limit the live feel of their shows. That said, drummer Fotis Benardo must be given a ton of credit for holding everything together with his precise, complex playing. The entire band evinces evil vibes with their menacing, dramatic stage presence. Septicflesh is one of the most innovative bands in extreme metal so the slim turnout was disappointing. My only real complaint was that the set was on the short side at one hour. Aside from that, this was a monster of a show by one of the best black metal bands touring these days. 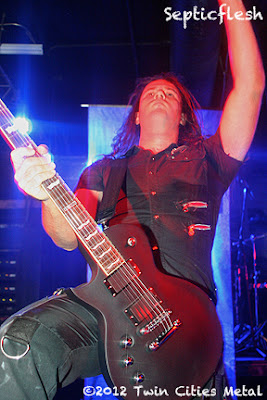 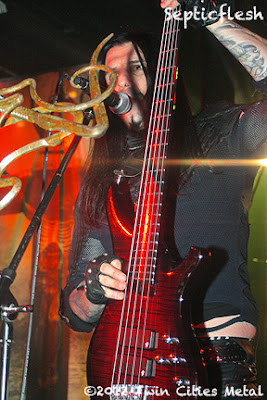